One of the things that seems to happen a lot these days is that when people discover you still shoot film, they offer you cameras. I’ve already got the typical photographer’s problem of accumulating more gear than I can use all on my own; with the various cameras that people have given me, the collection is growing slightly out of control, and that’s with me plaintively (though half-heartedly) refusing some of what’s thrust at me.

But there are some cameras you can’t refuse. When my uncle told me he had several of my late grandfather’s old cameras that he wanted to send to me, I knew they were coming; but I didn’t know what I would be getting.

When they arrived, it was a typical mixed bag; about what you’d expect from someone who was buying cameras to take snapshots with between the 1950s and the 1970s. There were a couple of obsolete cameras: a Kodak Ektralite 10, a 110-film bar camera, and an Agfa Isomat Rapid that was designed for the long-gone Agfa Rapid system. But then there was the prize: a Konica III rangefinder. 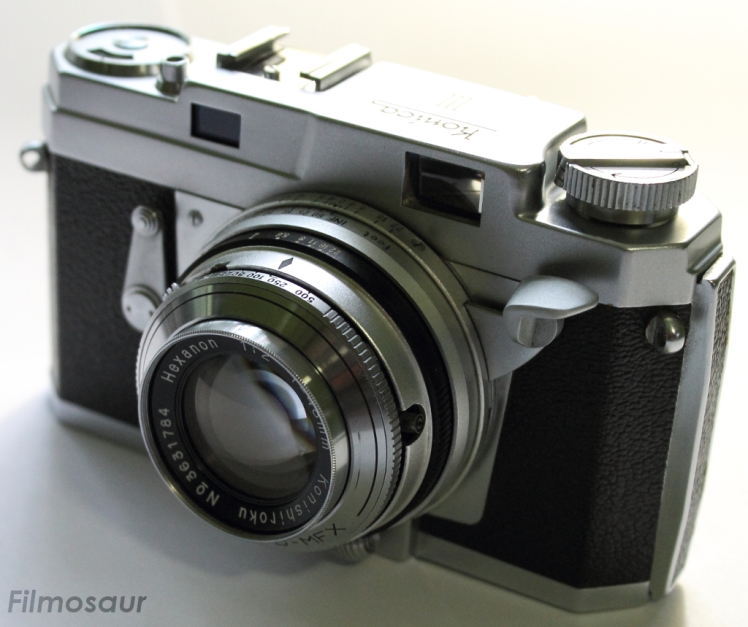 Debuting in 1956, the Konica III followed the earlier (wait for it) Konica I and II, which were pretty traditional post-war Japanese fixed-lens rangefinders. The III was anything but conventional. Instead of the knob-wind of the earlier models, it used a double downstroke lever operated by the left thumb to advance the film and cock the shutter. A focusing tab was placed at the bottom of the lens barrel to facilitate focusing with the left index or middle finger. It’s an odd arrangement, but it does work once you get used to holding the camera in what feels like a slightly awkward position.

There’s no way around it: the thing weighs a ton. It’s not a particularly large camera, but it feels like it’s filled with lead. I’m sure it isn’t, but that’s what it feels like. Styling is very 1950s Japanese – think low-budget science fiction movies or metal wind-up robots. Nonetheless, quality of construction is very, very high, and the overall finish is excellent. My example lived in its original ever-ready case and looks essentially new. 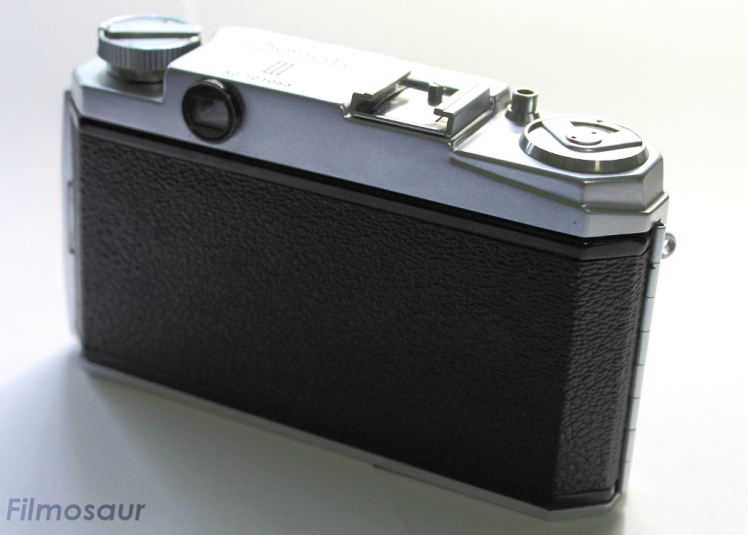 The lens is a 48mm f/2.0 Hexanon, apparently a coated Planar-type design of six elements in five groups. It is quite capable, producing very sharp images and reasonably nice bokeh (why do I always feel slightly stupid using that term?) in the out-of-focus areas. Aside from a little haze – now removed – my example is flawless.

The shutter is a Konirapid, a Synchro-Compur copy offering speeds from 1 second to 1/500, plus B. Speeds are quite accurate by my testing. There is also a self-timer for those so inclined; mine is working fine, but I’m always a bit nervous engaging the timer on an old camera for fear it will lock up the mechanism in some inconvenient way.

I didn’t need this camera. I wouldn’t have gone looking for one of these, as I have plenty of other cameras that do more or less the same things. But it was my grandfather’s, and my uncle wanted me to have it. Turns out that it’s an excellent piece of machinery that happens to work perfectly. It’s really pleasant to use, and the images it produces exhibit a very nice character. I’m lucky it fell into my hands, and I’m more than happy to have it in my collection.