(I started putting this together right around the time things started falling apart, so after much delay and reediting and faffing about, it might seems slightly disjointed in places. Deal with it.)

As part of the cleaning and reorganizing of the site last year, I went through the gear listings to update status, add links, and just make everything generally more usable. In the process I noticed that there were some bits and pieces that had not been properly introduced, and thus had no posts to link to. This really bothers my OCD, so in the interest of calming the nagging voices in my head – well, one of them at least – I will be attempting to correct these oversights. 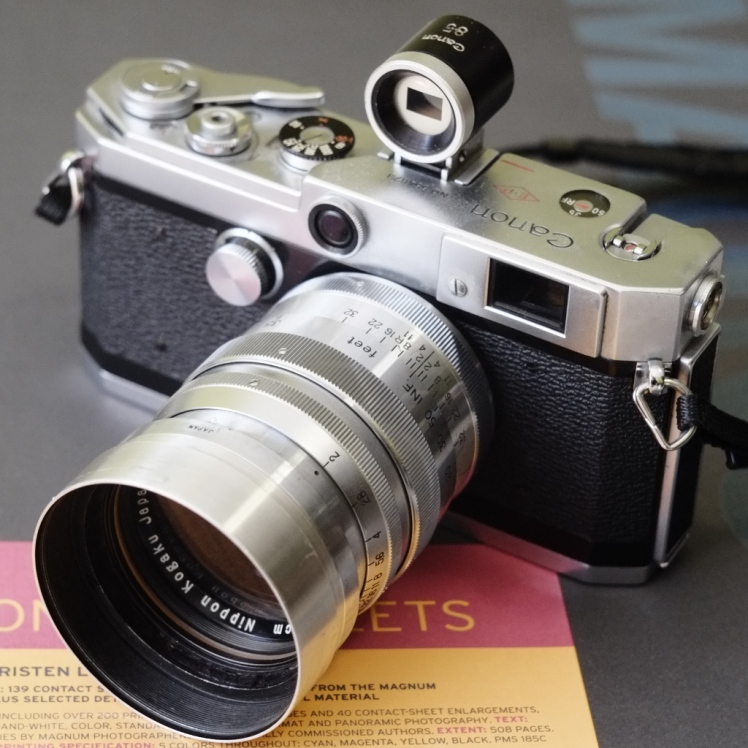 First up is the Nikkor 85mm f/2 in Leica Thread Mount. It’s a big beast of a lens, all solid brass and huge lumps of coated glass, with a nice two-piece hood that also holds a Series VII filter. The focusing throw is as long as it can be, allowing for precise, if not fast, focusing. Mine is a later version, so the aperture closes down all the way to f/32; earlier versions only stopped down to f/16. My example is, aside from a few meaningless cosmetic rubs on the finish here and there, almost pristine.

The sheer size and mass of the thing makes it a bit unwieldy on smaller Leica bodies, but it works well on the larger Canons. An added bonus of the latter is that there’s one of Canon’s trick automatic parallax-correcting brightline finders available in 85mm, making the L/V/VI-series bodies – all of which have the pin necessary for it to function – great option. I normally mount it on my Canon L1. Without a good finder, the lens would be largely relegated to static subjects; with it, it becomes useful for a wide range of tasks.

Obviously, this is all secondary to the sort of photos the lens produces. On this front, I cannot say enough good things about it. It’s sharp without being hard, creamy and smooth as it goes out of focus. Rendering is typical of Sonnar-formula lenses, but even by that high standard it’s excellent. From the first photos I took with it I knew it was going to be one of my favorites. I’ve only shot black and white with it thus far, but I’ll get some color behind it soon.

More than once I’ve heard or read of people advocating the 85mm focal length as the long half of a 35/85 two-lens kit. Given my increasing comfort with the 35mm focal length, I may give this a shot as a travel setup at some point, though I’m still instinctively inclined toward 28/50/100, but managing two lenses rather than three would be nice. The only real downside is the weight of the big Nikkor, but I’ve carried more and heavier gear before. 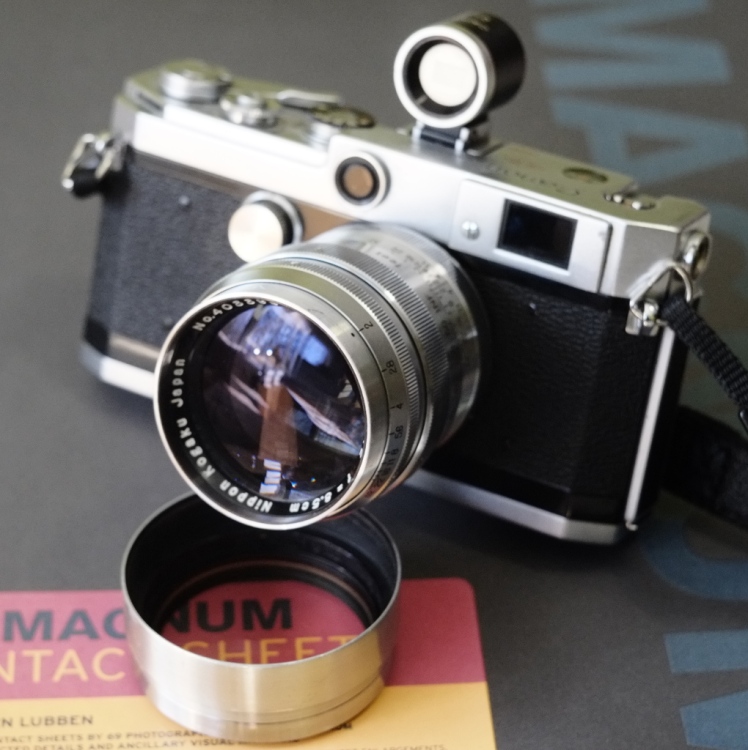 Regardless, it’s just a wonderful lens, one of the best I’ve ever shot with (by the purely subjective standards I apply to these things). While in a similar range to my Canon 100/3.5 and Elmar 90/4, it’s a very different animal, and it’s not just the extra speed. While both of the other lenses are quite good, the Canon especially, with pleasant rendering and good sharpness, they don’t have the smoothness, the elegance, the personality of the Nikkor. If you are looking for something in a portrait-length lens for LTM, I urge you to seek out one of these lenses – I cannot imagine you’ll be disappointed.

If you’d like more history and technical information, Nikon has thoughtfully provided an in-depth discussion here.

I’m a natural 50mm shooter. Like a lot of people, I started with it, and it just feels like what I expect when I look through a viewfinder. Anything else is always slightly off at first, but this is especially true with wider focal lengths.

Even though 35mm is hardly extreme, it still feels a little…off. Using the Minox as much as I have (relatively speaking) in the last couple of years has, however, made me a little more comfortable with it. Even though it is considered a general-purpose lens (hence its attachment to so many fixed-lens cameras), I find it tends to exaggerate distances in a very noticeable way (to my eye, at least).

Looking back at my photos, I find I’ve been unconsciously using this fairly often to create a particular sort of a style of photo, often with dominant lines stretching toward the horizon (usually) that further emphasize or create a sense of distance from the viewer. Also included here are photos taken from unusual angles that, added to the mild distortion of the wide angle, tend to be a bit disorienting.

This isn’t to say that I’m using this like some sort of special-effects lens (it isn’t), nor that these are the only sorts of photos I’ve taken with it (see the few posts below this for evidence). But I do find it interesting that I seem inclined to experiment with what is usually considered as fairly normal focal length; I don’t see the same sorts of images coming from my 50mm lenses.

Maybe this means I’m finally getting a handle on how to use a 35mm lens. Or maybe not. If nothing else, it seems as though my photos taken with this particular one at least have developed a degree of consistency that I hadn’t noticed before. 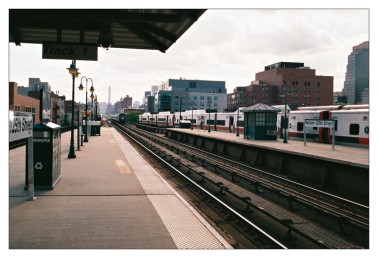 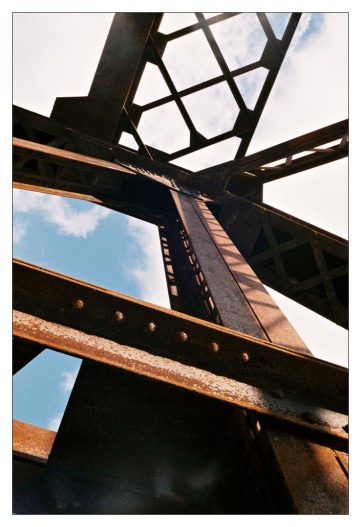 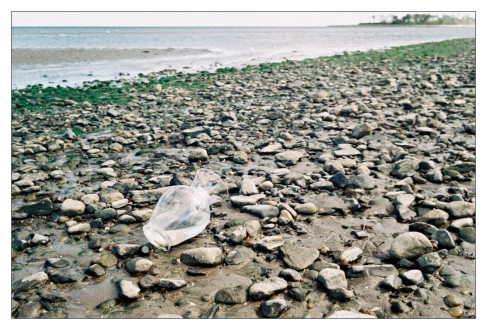 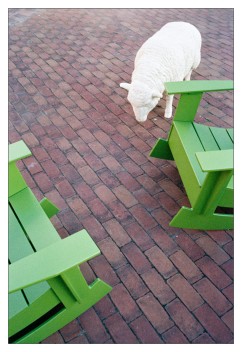 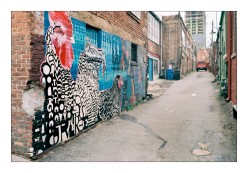 Recent months saw me using my two Konica cameras – the Konica III and the Hexar AF – and finding myself impressed with the quality of their respective lenses, as I’ve noted here before. While this might seem like nothing more than a harmless observation, it quickly morphed into an obsessive need for a similar lens that I could mount on my LTM cameras. This presented a problem, in that Konica produced few lenses for Leica mount, and the ones that are out there aren’t cheap.

After looking into the quite modern 50/2.4 and the 35/2.0 (the latter is the Hexar lens in an LTM mount), I came to my senses and decided that their prices were simply too high to warrant serious consideration. This led me to the older Konishiroku (Konica’s predecessor) options, which basically boil down to the 50/3.5 collapsible Hexar and the 50/1.9 Hexanon. Both of the cameras I have have f/2 lenses, and the 50/1.9 LTM is supposed to be quite similar to the 48/2 in the Konica III, so I decided to go for the faster lens, in spite of greater rarity and higher cost. 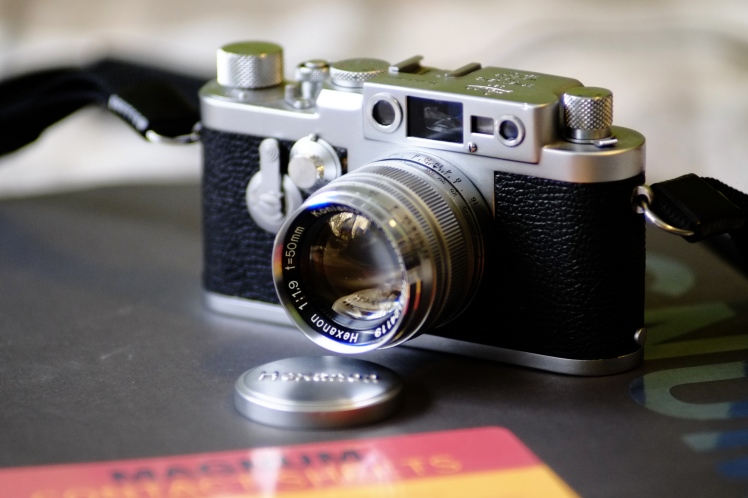 I found very little information out there on either Konishiroku lens. What I was able to determine is that the f/1.9 Hexanon is a coated six-element, five-group Ultron derivative, making it fairly unusual in the LTM 50mm world. The body is brass and heavy, as is typical of 50’s lenses, with excellent build quality and machining. The aperture stops down to f/22 in full-stop clicks, which are nice and positive. It takes common 40.5mm filters, which was actually a considerable plus in my deliberations, as I have an extensive collection of filters in this size.

What made the lens worth seeking out and paying for (to me, at least) is the rendering. My Konica III produces really special images, sharp even wide open and with a nice three-dimensional look that stands out. It’s distinct enough from other lenses in my collection that I wanted the opportunity to get it with the cameras I tend to use most often. Though the Konica III is a fine (if quirky) camera in its own right, I know that I work best with my screwmount Leicas and Canons, and I have the accessories to get the most out of the LTM 50/1.9. I briefly considered finding a Konica IIIA, which differs from my III in that it has a large 1:1 viewfinder with projected framelines, making it much easier to use, but in the end I decided it was worth the extra cash to just get the LTM version.

All that remains is to put it use. A quick function test on my X-E1 suggests that my expectations are in line with what the lens can produce, but the real test is film, of course (a full-frame digital camera might do as well, but I don’t have one, so film it is). When time permits I will get it out and into service…

(Fast forward a week or so)

…and now I can show evidence that my interest in the Hexanon was not misplaced. As expected, it exhibits the same character traits as the 48/2 version. This shot was around f/4, if memory serves.

Obviously, more extensive use will be necessary to get full measure of the thing, but the initial indications are that this could easily become one of my most-used 50mm lenses. I don’t say that easily, considering my fondness for some of my other 50s. It’s not compact or light, but on days when I don’t mind carrying something a bit more obtrusive I think it will be hard to resist reaching for the Hexanon.