A little something from the archives. I’m not even sure how far back this one dates….

Something like twenty years ago I went out to visit a buddy in Tucson, Arizona. As I recall, I was assured that the weather there was a steady stream of hot, sunny, dry days. Nothing but the sort of reptile-friendly weather that Your Humble Filmosaur thrives upon. Guaranteed.

It probably goes without saying that this prediction was right up there with the unsinkability of the Titanic in its accuracy. Nonetheless, we headed off to a park just outside the city for a bit of hiking; I suspect I did more complaining than anything else, but then I’m a problem that way. The sun did make some appearances, and in those moments I was able to get some decent photos. At least after I’d stop shivering and dried off.

I had my trusty Pentax SFX with me, largely because at that point I don’t think I owned another camera. It acquitted itself pretty well, especially considering that this was during my “full-auto-just-point-and-shoot” period. Those were dark times, or would have been without auto exposure….

I suspect that slight vignetting at the top corners came when shooting at the wide end of the zoom and was due to stacking a polarizing filter on top of a UV filter. This is of course completely unnecessary and probably downright wrong in virtually every conceivable circumstance, but what did I know?

The scenery was obviously quite striking, irrespective of the vagaries of the weather and my own photographic blundering. The vistas were majestic. The colors were spectacular. The cacti were numerous and pointy.

Quite pointy indeed, as shown by this macro shot. I enjoy macro photography, and the Pentax is quite good at it, even with the kit lens. I should do more of it.

Clouds or no, it’s a pretty place. The clouds actually made the light rather more interesting, casting those dark shadows across the otherwise bright landscape, adding depth and contrast to the scene. It’s easy to see that now. Back then I just wanted the sun to come out and warm things up.

With the 150th anniversary of the first shots of the American Civil War having just passed, it seemed only appropriate to point the Filmosaur Way-Back Machine at South Carolina, site of those fateful shots and, more recently (though no less auspiciously), a Filmosaur vacation. All of these were take with my first digital camera, a Canon A60, which is still functional more than eight years after purchase, thanks to Canon recently replacing a failed CCD image sensor free of charge. They did this on my S1 IS as well. This is why I have become a Canon loyalist; now if they would just release Linux drivers for the 8800F scanner…but I digress.

The South is not a place that takes too readily to change. A brief stroll around the town of Conway, near Myrtle Beach, showed up ample evidence of this.

Trim back the roots? Nope. Move the wall? Nope. Come up with a temporary solution that can’t possibly become permanent and does nothing to resolve the underlying issue, and perhaps makes things that much more complicated in the process? Sure, why not. As far as I can see, this is the brick wall equivalent of the Compromise of 1850.

Not big on the accommodation of new ideas, either. To wit…

Try as I might, though, I couldn’t find any “Whites Only” water fountains. And I was thirsty.

Still, I don’t mean to be unnecessarily difficult. Well, I do, but only to a point. After that it seems gratuitous, and that’s just unbecoming.

This bridge is apparently famous, or so I was told. It is rather striking, though as you can tell by the throngs of visitors, it is perhaps under-appreciated. The parking lot of the nearby Hooters was, by contrast, full to overflowing. Bloody Philistines…. 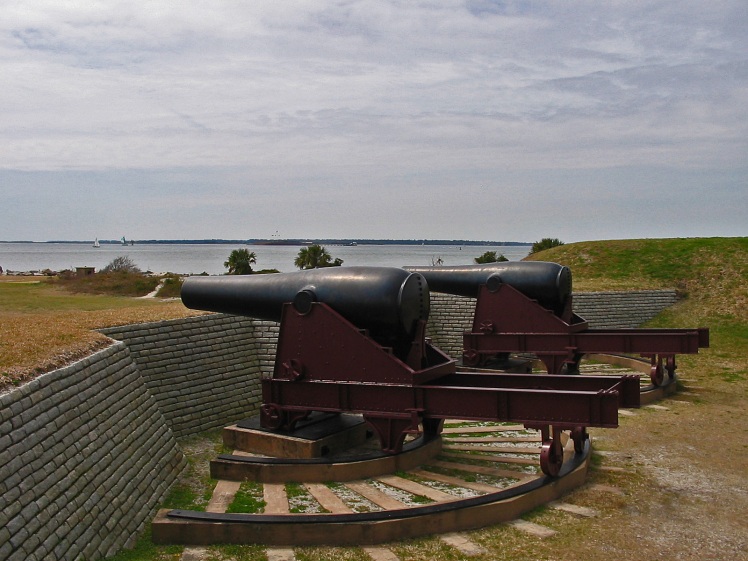 You can just make out Fort Sumter in the background. Lest someone claim false advertising, the first shots were not fired by these cannon, which I believe post-date the war.

Charleston itself is lovely. Antebellum homes, gardens spilling over with flowers, and a subtle, welcoming charm. Even a poor misguided Yankee could come to feel at home. Well, almost. It’s still a fine city. 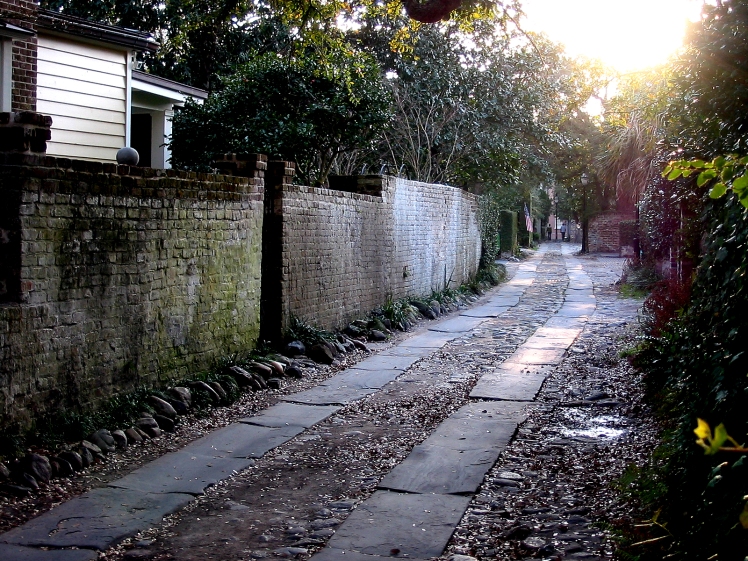 Wandering its back streets, one feels that the past is not quite as distant here as it is elsewhere. Of course, the Stars and Stripes flying proudly there outside an ivy-covered gate just down the road does tend to suggest that the past is not quite as close as it once was. It took a fair bit of ugliness to get to this point, but at least this little corner of the South seems to have settled comfortably into the modern era, having lost little of its charm.