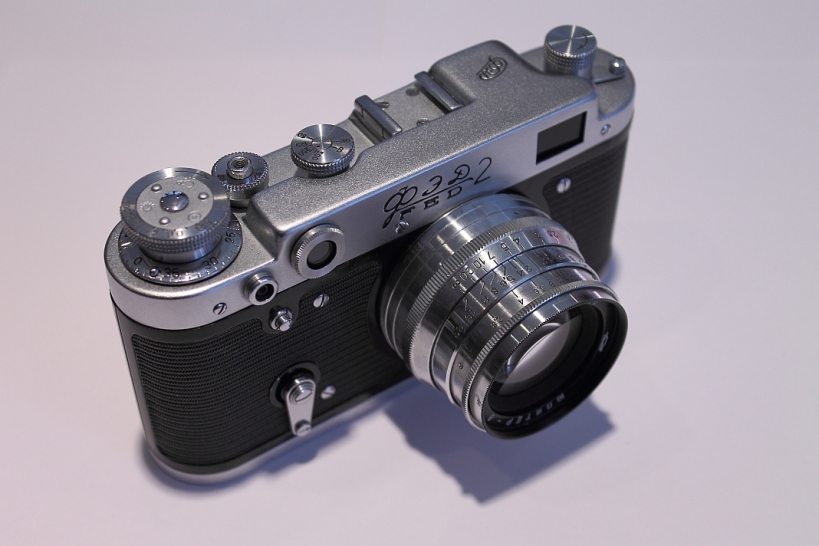 The FED-2 has become quite a common sight in the film photography community lately – quite a feat given that, as a product of the Soviet Union, it was largely unknown in the West throughout its production life. But now that the Cold War has ended, financial opportunism has taken root, and the internet has made it possible to buy stuff from pretty much anywhere with a few clicks, FEDs and other Soviet cameras are popping up all over the place.

There’s a bunch of good reasons for this. These cameras are essentially copies of the famous pre-war Barnack-designed Leica at a fraction of the price, which is a pretty good reason to get one all by itself. That means the controls are all manual (shutter speeds from 1/500 to 1/30 plus B), and since there’s no meter, you’re pretty much on your own. Sure, Soviet quality control wasn’t always quite up to Western standards, but get a good one and it’s a reasonable facsimile of a Leica, if you’re not too nitpicky about it.

But the Soviets deserve credit for more than simply ignoring patent laws and lax quality assurance. Yes, they did keep building cameras based on decades-old designs even though the rest of the world had moved on, but they did make improvements in an effort to bring the design a bit more up to date. Some of these were actually pretty useful: the FED-2 has an integrated viewfinder/rangefinder with a much longer distance between the VF and RF mirror windows, allowing for more precise focusing than with the original Leica. It also had a removable back for easier film loading. Later models variously added light meters, film advance levers, slow speeds. Of course, they also benefited from that Soviet design aesthetic than made them look increasingly like they were engineered by people who previously designed those living room-sized control consoles for industrial equipment that consisted of a giant dial, two oversized square buttons, and a flashing red light. The FED-2, though, did not suffer from these complications. It’s pretty faithful to the Barnack design with just a few tweaks to improve usability.

The FED-2 was produced – like so many Soviet consumer products – largely unchanged for over a decade (1955-1968, not counting the transitional E model), with the total run amounting to over a million and a half units. Mine is a late D model from 1966, with a fabric body covering and self-timer, but no strap lugs. Aside from these minor detail variations across the model range, the major difference was in the standard lens fitted from the factory. Early FEDs came with a collapsible FED 50mm f/3.5 that made for a very compact package. Later models have a fixed body 50mm f/2.8 Industar-26m; a few are reported to have come with the 52mm f/2.8 Industar-61, which supplanted the -26m in the early 1960s. Mine was fitted with the Industar-26m, which in my experience was a good lens capable of producing nice images, but not extraordinary. Those who are more particular about the finer technical aspects of their photographs tend to dismiss the -26m, but it really isn’t bad in my limited experience. 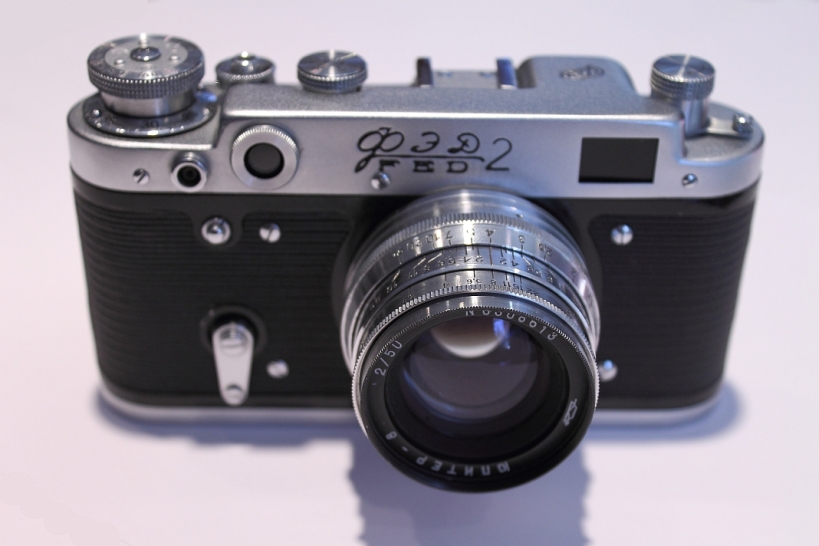 Nonetheless, it has recently been replaced with the 50mm f/2 Jupiter-8 seen here, which is a post-war copy of the Carl Zeiss Sonnar; this one was produced in 1963. Since the FED uses a standard Leica screw mount, there is a wide variety of lenses to choose from, both Soviet and Western. If you move away from the 50mm focal length, however, you’ll want an external viewfinder to compose with, as there are no alternative framelines in the stock VF. Many of the Soviet lenses are copies of Western designs and are quite well-regarded. I haven’t had a chance to shoot with the Jupiter-8 yet, but it is highly regarded.

So there you have it, the FED-2 in all its glory. It’s a knock-off, to be sure, but a pretty good one, and a nice little historical artifact of the Soviet industrial complex to boot. I run Tri-X through it almost exclusively these days, though I may shoot a roll or two of color to see how the new lens does with it. I’ve found it to be a really enjoyable camera to shoot, and the moderate size of the package means I don’t mind carrying it around (later FEDs got considerably larger). In some ways I have to credit mine with spurring me to go beyond both film SLRs and digital; the simplicity, the size, the back-to-basics experience of shooting with it, all helped me to recognize new ways of approaching photography.

Do you own a FED-2 or other Soviet camera? Filmosaur wants to hear about it!

I always enjoy throwing German words into conversation. It makes people think I’m really into 19th Century philosophy. Or maybe that I’m planning to invade Poland. Or that I’m just a tool. I like to keep people guessing.

Anyway, in case you actually care what Gestalt (yes, I’m capitalizing it as one would in German even though I’m writing in English – what a rebel I am) means but can’t be bothered to look it up yourself, here’s a definition, courtesy of Dictionary.com: a configuration, pattern, or organized field having specific properties that cannot be derived from the summation of its component parts; a unified whole. Pretty handy little word, huh? 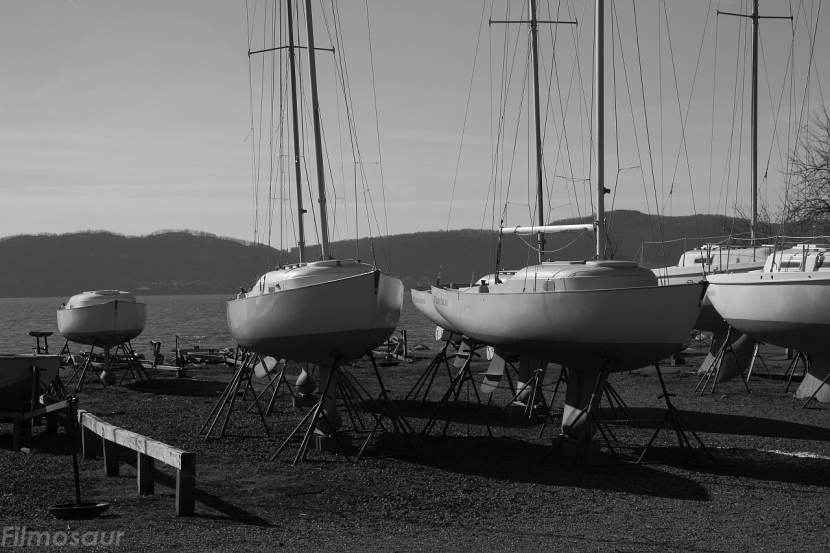 There is a Gestalt (yes, I’m going to keep italicizing it too) to the photo walk, as it is a total experience that cannot be explained or understood by breaking it down into pieces. It’s more than a walk; it’s seeing places in a different way, from a different perspective, looking at things through a viewfinder that might otherwise go completely unnoticed. It’s more than a photo session; it’s not the sterile, mechanistic practice of setting up lighting equipment and reflectors to get the perfect shot, but the act of working with what is available at that moment in time. Sometimes you need to get dirty, or do some work to get to where you need to be to capture an image, or feel your fingertips freezing from holding the cold metal camera in one hand for too long. It’s about taking photos that remind you not only of what you saw, but what you felt, and what it took to get them. And ideally, any proper photo walk should end with beer. 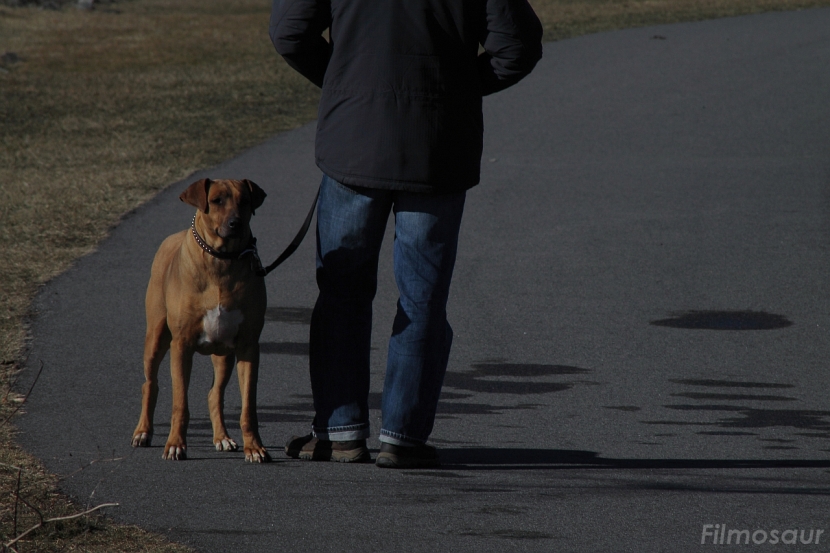 Although all of the shots in this post were taken with my Canon T3, do not take this as the beginning of another lapse into digital. On the contrary, much of the purpose of this particular walk was to finish off two rolls of film, Tri-X in my FED-2 and my last roll of Fuji Superia 400 in my Olympus PEN EES-2; that mission was accomplished, but it will be several days before those results are in. The DSLR was just along for the ride.

You can look at the photos, and you can try to imagine what the day was like if you’re so inclined, but you cannot experience the Gestalt of the photo walk during which they were taken. Your fingers weren’t freezing. You didn’t avoid the crazy guy sitting on the rock by the river. You didn’t taste the beer. You weren’t a component part of the unified whole. You weren’t there.

In an effort to motivate myself to keep shooting film on a more regular basis, I’m going to start posting a single frame when I get a batch of film developed. Not necessarily the best, or having any particular significance except that it caught my eye for some reason (hey, it’s my blog – I can do whatever I want here, and you can’t stop me!). There may or may not be commentary or explanation on my part to accompany it (you all can comment as much or as little as you like). So, without further rambling, a little something from my FED-2 shot on Tri-X: 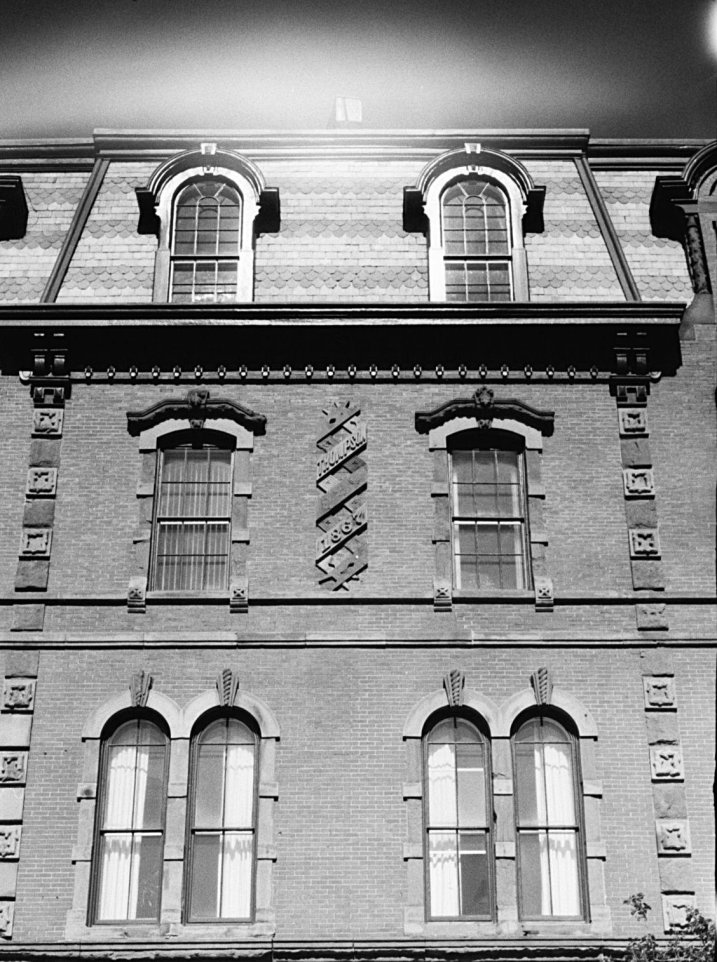