Everyone knows the benefits of interchangeable lenses. Anyone who has been in the photography game for a while has probably used at least one or two interchangeable lens cameras, and some (Your Humble Filmosaur included) have vast colonies of lenses that seem to multiply all on their own, migrating and attaching themselves, lamprey-like, to any camera body they can find.

The voraciousness of lenses for camera bodies is strictly limited, however, by the fact that each can accommodate one, and only one, lens (unless you’re doing it very creatively wrong). Once a lens has attached itself, the camera is safe from further predation. Perhaps it is as a result of this natural limitation that some cameras and lenses seem to form a symbiotic relationship, rarely if ever separating from each other. This unnecessary pair-bonding is little-understood by the scientific community, but we can at least offer a theory.

Some cameras and lenses just seem to go together. They achieve a kind of mutually-beneficial balance that makes each seem to perform beyond its own individual potential. This phenomenon is sometimes seen among the fixed-lens subspecies, as might be expected, but it remains surprising when it manifests itself in the more complex realm of interchangeable lens cameras. When it does, something magical happens…(cue slow motion close-up)

OK, enough channeling David Attenborough. The point of all this is to say that some cameras and lenses just work together. In my collection there are three combinations that seem to remain more or less permanently attached because they just work.

First up is perhaps the most classic of all, a Leica IIIc with a 50/3.5 collapsible Elmar and a SBOOI viewfinder. It’s small, handy, and extremely capable. I shot my whole trip to Germany last year with this camera alone. It fits in a coat pocket. It’s discrete. With zone focusing and reasonably consistent light, it’s as fast to use in the street as any point-and-shoot. If I had to live with one camera and lens, there’s a very strong likelihood that this would be it.

Closely related is a relatively new combination, a Leica IIIa (which originally came to me with a Summar attached, as described here) with a Nikkor 28/3.5 and matching viewfinder. Everything that I said about the IIIc/Elmar combo applies here as well. I’m less acclimated to the 28mm focal length, but I’m finding it is a nice compliment to 50mm in a two camera travel kit.

Finally, my venerable Canon P, after much experimentation, seems to have settled down with a Canon 35/1.8. It may seem a bit odd, given my 50mm inclinations, but I shot more in 35mm last year than I had before – mostly due to my dalliance with my Hexar AF – and I’m more at ease with it as a result. The P’s viewfinder is 1:1, rare for the 35mm focal length, which makes it easier to use in the street. The package balances well.

These three might as well be fixed lens cameras at this point. Some rigs just work, and if something works, why mess with it?

There’s no question that I’ve taken a lot of photos of vintage cars in my life, so they seemed like obvious subjects for my sporadically-implemented Vemödalen Project. When I went on my annual pilgrimage to the Lime Rock Historics (which used to be called the Vintage Festival, which was a much better name) I took along what is the usual kit these days: a Leica body, in this case with a classic Elmar 50/3.5 screwed on the front and loaded with Kodak Ektar.

The plan was to get in close; this is not an entirely new approach for me, I know. I really wanted to try to emphasize graphical compositions, not to the point of total abstraction (which would be difficult in any case), but to get away from the instantly recognizable shape of a car and toward something that requires a bit more attention and thought on the part of the viewer. To my eye some of the shots I’ve chosen to show here are more successful that others in this regard, but that’s part of the process.

The other question raised here is the use of color versus monochrome film. There’s no doubt that black-and-white is by its nature more abstract than color, a point confirmed by a little experimentation with digital desaturation in post-processing. I chose to shoot in color because 1) I don’t do it that often, and practice is good, and 2) it added to the challenge. The fact is that some, if not all, of these shots might be better in black-and-white, but the Vemödalen Project is not really about the end result as much as it is about how one gets to it.

You can judge for yourself. 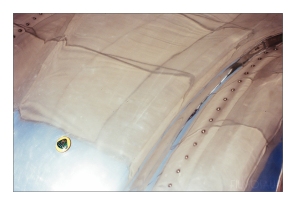 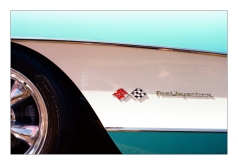