As I mentioned in my last post, while I have taken a few photos over the last year, I haven’t really felt that the process was particularly directed. Mostly it was just pointing the camera at something that momentarily caught my attention and taking the shot. Unsurprisingly, I found myself gravitating toward my least demanding cameras – the Minox 35ML got more use than any other. One could argue it was a very zen way of photographing, but that’s a big stretch, as it implies intent; this was zombie photography, driven by some primal urge toward something I vaguely knew I wanted, but didn’t know why, or how to get it. In case it wasn’t clear, I’m talking here about meaningful photos, not delicious brains.

Clearly, this process, or lack thereof, is not going to produce any sort of coherent result, unless of course your objective is to be incoherent (much as I admire the conceptual novelty of Dadaism, it is not something I have embraced). There is no overarching idea or purpose behind any of my photographs from this period. They are snapshots in the purest form of the word. Still, one might ask, doesn’t a group of images taken in similar circumstances or conditions take on a collective meaning, even if the individual photos have none? Perhaps, but I’m still too close to them to even begin to think about them that way. For now, it’s just a pile of pictures.

But this is the Internet, damn it, and by now most of you have either stopped reading and gone to look at Instagram, or if you’ve inexplicably stuck with me this far, are nonetheless growing frustrated and annoyed with the seemingly endless stream of boring words on what is ostensibly a photography blog. So here are a few of the photos I shot in the last year or so, more or less randomly chosen, all from the Minox that kept finding its way into my pocket. There’s no theme, no big idea – just pictures. Are they interesting? I’m not really sure, but if any of them are, it’s pure dumb luck. As the saying goes, it’s better to be lucky than good.

It’s been the better part of a year since I got my Hexar AF Rhodium, and as it is so different from the sort of equipment I normally favor, it seemed appropriate to offer a bit of a followup. Readers of the initial piece will note that I was rather uncertain about how I would get on with the Hexar, openly speculating that its time with me might well be short. Well, it’s still here – time to address why.

Put simply, I’m really enjoying using the camera. I don’t really know why, but I am. It fits my hand well, it’s very easy to use, and the results are very, very good. I took it on vacation last summer, shot a friend’s band’s gig in a dark bar, and used it extensively this past fall as I burned up some of my old expired color film stockpile. I’ve shot maybe a dozen rolls of film with it – B&W (some of it pushed to 1600), color print, and slide – and it’s handled everything nicely. The metering spot-on. The autofocus is startlingly competent. There’s really been nothing to dislike.

I’m growing more accustomed to the 35mm lens. In spite of having a few lenses in this focal length, I haven’t tended to use them a lot. It’s proven a useful in-between for when I’m only carrying one camera (I’m finding myself tending more toward the 50/28 two lens kit when I travel, so 35 splits the difference). It stills requires more conscious attention than when I shoot 50, but that’s just me. The speed of the camera itself helps to offset my own slowness in framing and composition.

The quality of the lens is well-documented, but I feel a few words are necessary nonetheless. The rendering is somewhere between modern and classic. It captures fine textures very well without feeling overly sharp, and the fall-off into the out-of-focus areas is gloriously creamy. Contrast is again more than you would see with lenses from the 1950s and 60s (let alone uncoated ones), but not the biting contrast of truly modern glass. While it definitely produces more modern-looking results than most of the lenses in my collection, it strikes a nice balance that makes it clear it is not something calculated by unfeeling machines and churned out in the last decade.

In spite of all this, there’s still some cognitive dissonance. Relying on a partially automated, battery-dependent camera partially made of plastic sticks in my craw. The whirring noises bug me. Where’s the damn advance lever? Even though it’s given me exactly zero reasons to doubt it, my own predilections leave me feeling every-so-slightly suspicious that it’s going to melt or explode or whatever modern cameras do when they fail.

What I plan to try next is to use it for some street photography. Rather than allow the camera to just do its thing, I’m going to lock the focus at 3m, the aperture at f/8 (or f/5.6, depending on the light), and go from there. I may even set the shutter to 1/125, but chances are I’ll at least let the Hexar control the speed via its Program mode (which is a sort of smart Aperture Priority), in part because I don’t want the little electronic elves to feel spurned and go off pouting and letting the smoke out. When I shoot manual cameras in the street I use the settings above in most cases, so it will be interesting to see how the Hexar AF compares in similar circumstances. I have a feeling it will be fine.

So what’s the verdict? Well, I’ve been happier with the Hexar AF than I expected to be. In spite of knowing that I could probably sell it easily and for a fair sum (certainly more than what most of my cameras would fetch), I’m keeping it for now. Will it continue to impress me favorably, or will it crap out and leave me annoyed at my misbegotten faith in it? Who knows. I like it enough that I think I’d be genuinely saddened if it failed in a way I couldn’t fix, and that’s not something I would have expected to find myself writing when I first laid hands on it.

Postscript: I followed through with my plan a few days ago. As intended, I set the aperture at f/5.6 (it was mostly cloudy) and let the camera settle on a shutter speed, but I left the autofocus on for the most part. I’m not sure why – I think the idea of setting the focus manually seemed contrary to the nature of the Hexar AF. I mean, it’s got AutoFocus in the name, for crying out loud! (Before you nitpickers get all wound up, I know the official name is “Hexar,” not “Hexar AF,” but what does everyone call it? So there.)

So how did it do? Fine, in that it didn’t cause me any problems, and was as compliant as I expected it to be. As for the photos, well, they’re what I expected from the lens in technical terms, but they also confirm that I am more a natural 50mm shooter, especially in the street. Several times I felt like I wished I had the longer focal length, and the photos reflect that my framing with the wider lens is looser, and in my eyes less refined. It just feels sloppy, or perhaps uncontrolled. I know a lot of people prefer wider lenses for street shooting, and I definitely found it useful in certain circumstances, but it never felt as instinctive as a 50mm.

So the Hexar is not likely to supplant the Leicas for street work, but that doesn’t change my feelings about it. It’s still a very good general purpose and travel camera; like every camera, you have to learn and work within its limitations, but first you have to find them.

Hudson, NY is a strange place. Outwardly it appears simply one of many post-industrial towns along the Hudson River, but it has in its past some interesting history. Unlike most river towns, Hudson made much of its 19th Century fortune in whaling, despite being close to 100 miles from the open ocean. In the 20th Century, it had one of the greatest concentrations of prostitutes on the East Coast. A successful and prosperous city for many years, it was almost selected the capital of New York State. In spite of economic difficulties after the Second World War, it still shows the evidence of that prosperity, with many houses now designated historic buildings. More recently, it has begun to gentrify and revive economically, though this process has been slow and uneven.

We went up a few weeks ago to get lunch at a pizza place we like, and of course to walk around and take some photos. I had B&W in one of my Leicas, but these were all shot on out-of-date Kodak Gold 200 with my Rollei 35. It was overcast, which worked well with color. The palette is reflective of the city itself, with muted colors of a long history offset here and there by splashes of bright new paint applied by those trying effect a revival. While the latter draw the eye more readily, the view is still dominated by what came before. 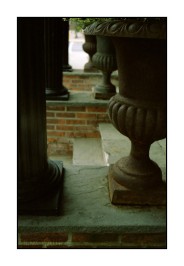 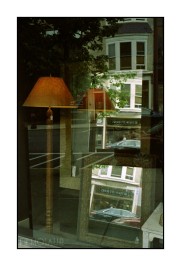 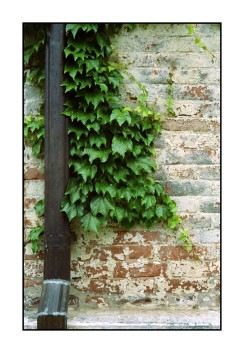 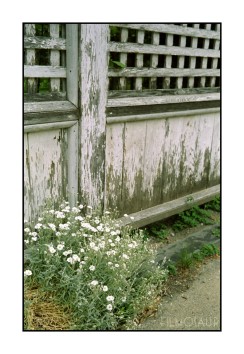