A little something from the archives. I’m not even sure how far back this one dates….

Technically speaking, there really aren’t that many different ways for a camera to take a picture. There are a bunch of nuances and degrees of precision, to be sure, but the basic concept remains the same: a combination of shutter speed and aperture allow a controlled amount of light to pass through a lens and onto film. And once you acquire enough cameras the nuances start to overlap; get a few cameras from the same era built to a similar standard and you’re not likely to see huge differences between their photos. Build up a large enough collection and inevitably you’re bound to see some duplication of capabilities.

The natural tendency once one hits that threshold is of course to gravitate toward the cameras that are the most comfortable to use and that are capable of producing the best (“best” being a highly subjective term) photos, leaving the remainder to sit forlorn and unused. At that point, you can either sell off the excess, force yourself to use them in spite of there being no logical reason to do so, or let them keep collecting dust. Or you can get creative.

Your Humble Filmosaur is well past the threshold. With close to a dozen 35mm cameras and several medium format options to choose from, there’s simply no way to use them all. Most all of them are technically competent and reliable, which means that the ones that will be used most are those that transcend basic competence and offer something special. My Rolleiflex seems to be capable of greatness; my Canon P is the basis of a wonderfully usable and flexible LTM system; many of the others have their charms for specific purposes as well. Naturally, with so many choices, anything that falls toward the lower end of the performance scale is probably going to be overlooked. 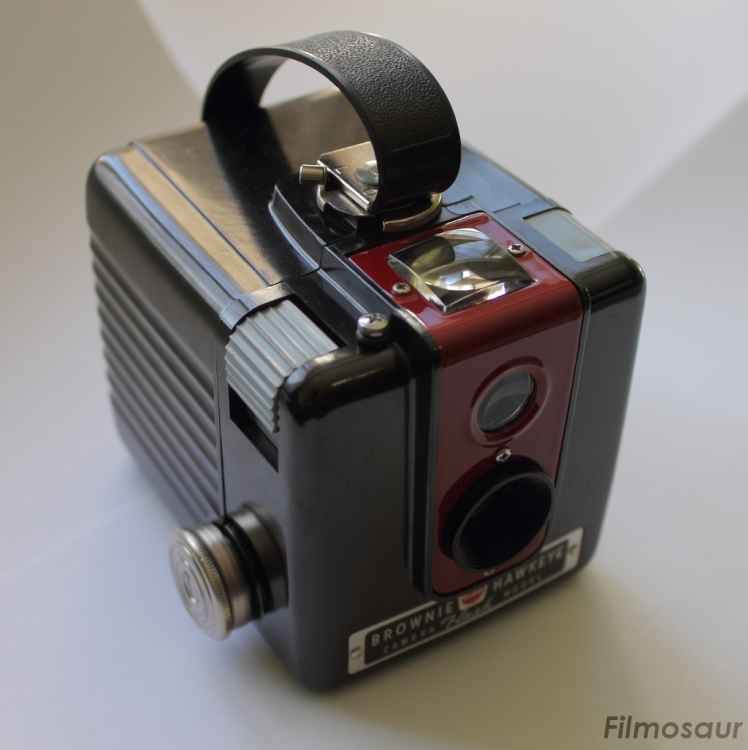 And so we come back to my Kodak Brownie Hawkeye. A fun little camera to be sure, and a great early example with a glass lens and metal advance knob, but let’s be honest: it’s not the first thing one tends to grab when so many more capable options are readily available. But look at it – how can one be expected to just leave it sitting there and not feel a twinge of remorse? Having already converted my Brownie Flash Six-20 into a pinhole camera, I had little fear of dealing with the very basic mechanicals, but as the Hawkeye is not well-suited to pinhole conversion I had to consider other options.

The answer to this little conundrum lies in the simplicity of the Hawkeye’s construction. There’s not much to do with the fixed aperture and the single-speed shutter, but you see, with the removal of a couple of screws the lens is right there for you to play with. Being a single element in a slip-fitted plastic mount, non-destructive creativity is limited to one modification, but that’s enough, because flipping that little lens around backwards instantly turns the Hawkeye into a camera that does things that others can’t.

While the lens in its usual position is about as capable as a mass-produced uncoated meniscus lens built to a price can be (which is to say not very), backwards it’s downright lousy: sort of sharp right on center, but it quickly starts to soften, especially toward the corners, ending up heavily blurred at the edges of the frame. There’s pretty severe barrel distortion as well. And yet, as bad as it is technically, the effect it creates is fantastic and downright funky – the distortion creates a wild motion blur look that serves to highlight a central subject very effectively while adding tremendous depth to the picture. While it doesn’t work for everything – as one might expect for such a distinctive and pronounced effect – when it does work, it works really, really well.

If you have hopes of controlling the results, you obviously need to be careful to get the subject dead-center, and you have to be more cognizant than usual of where identifiable detail will be preserved and where it will be lost. Of course, depending on the composition and your shooting style, this may or may not be particularly relevant. The slightly out-of-control feeling one has when shooting with this sort of camera is part of the appeal.

So rather than just let your old cameras sit idly by, surpassed by more capable, technologically superior models, you might as well tinker with them. For something as common and inexpensive as a Brownie Hawkeye, there’s not much to lose, but there is most assuredly the potential for something to be gained. I should point out that I’m not the first person to do this – the internet will provide plenty of other examples should you be inclined to search them out – but having done it myself I felt it worthwhile to offer my own experiences in order to encourage others who might have a simple old camera waiting to become something a little bit special.