At this point, it will be clear to regular readers that Your Humble Filmosaur has settled into the Leica Thread Mount (LTM) rangefinder as the basis for his go-to 35mm photography kit. The Canon P that has contributed so much here is the standard body, for a which a growing heap of lenses has begun to accumulate. It started with the Soviet Jupiter-8 50/2 and Jupiter-12 35/2.8. Then came the Leitz Elmar 90/4 and the Nikkor 135/3.5. Finally there was the Canon 50/1.5. Clearly, the last thing I need is more lenses….

So obviously, I got another lens. The rationalization, er, reason, for this is primarily that I felt that I could not rely on the Jupiter-12 to produce reliable, consistent results, especially with color film. The main problem seems to be an internal reflection that can, if the light is bright and coming somewhat directly into the lens (it’s usually worst when the light is about 30-45 degrees from the central axis of the lens), create a distinct bright spot – not a flare in the traditional sense, but just as problematic. With black & white film, this is not a huge issue, but still annoying; with color, however, the reflection takes on the purple color of the lens coating and splashes it loudly somewhere in the frame. Not good.

I’ve taken plenty of shots with the J-12 that I’ve liked, and when it’s good the results are very nice. But the risk of having photos spoiled by stray light, especially bright purple light, means that I’ve been reluctant to use the lens. If I was to have a 35mm lens in regular rotation, something else would have to be acquired.

My experience with the 50/1.5 having been entirely favorable, a Canon 35 was the obvious choice. I prefer the look of the earlier chromed brass lenses over the later black SLR-style, which limited my choices to the 35/3.5, the 35/3.2, and the 35/2.8. The first is a simpler design with a mediocre reputation; I would have settled for it at the right price, but I knew I could do better. I had my eye on a 3.2 (lens only, no viewfinder or case) at a reasonable price, but I kept looking. A nice 2.8 popped up on eBay, complete with original finder and case, for a buy-it-now price about the same as the 3.2 I was considering. I lacked sufficient willpower to resist.

The 35/2.8 is a heavy little jewel of a lens. It’s a Planar formula lens – six elements in four groups – and is thus fairly sharp across the frame with minimal distortion. Some have described it as a high resolution, low contrast lens; I haven’t shot with it enough to make that determination myself, but it certainly seems to perform up to expectations.

It’s quite pleasant to use, with nice positive clicks for the aperture settings and a smooth focus (with a proper tab, which I quite like). Conveniently, I already have a set of 34mm filters that I bought for the Elmar 90/4 that work perfectly on the 35/2.8.  It’s very small, though the P is such a relatively large body that it doesn’t really make all that much difference in portability. 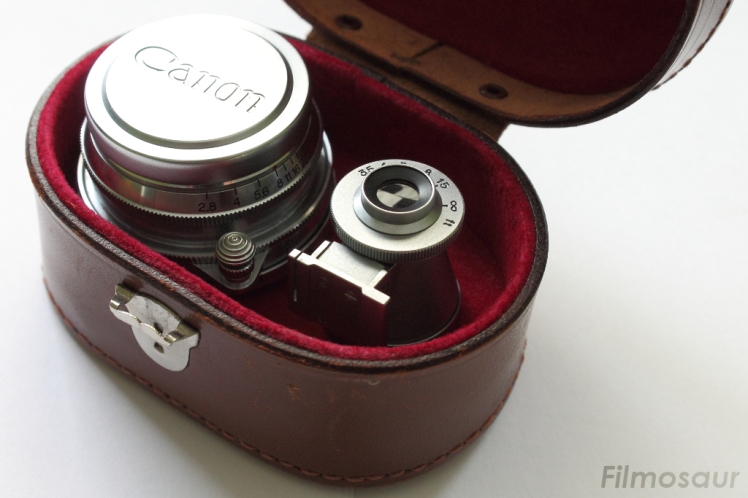 Since the P has 35mm framelines in the viewfinder, the accessory finder that came with the lens is not really necessary in typical use. It may, however, find itself paradoxically atop my FED-2, spotting for the Jupiter-12. The J-12 will probably not see regular use, but it is a capable lens in spite of the internal reflection problem; I suppose you could say that it’s user error more than anything (if I’d stop shooting in the general direction of the sun the problem would largely go away), but Your Humble Filmosaur shoots the way he shoots, and if the equipment can’t keep up, well, it’s not going to stay in the starting lineup.